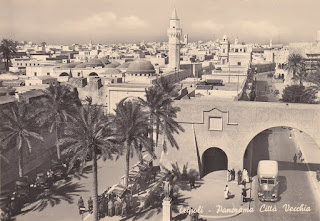 On the edge of the Mediterranean, Emad smiled as he thought of his day ahead.  He looked around the café in Tripoli and as always enjoyed watching the interesting people around him.  Libya was a study in contrasts, the people fascinated him.   The old city was somewhat like his native Egypt but with a strong Italian influence.  He swirled his caffe' macchiato in the cup and looked up to see a group of women chatting and laughing.

They wore bright headscarves and fashionable clothing.  They might be university students, he thought, from the University of Tripoli.  Or work colleagues on a coffee break.

Not too long ago cafes in Tripoli were a man's only club.  After Ghaddafi outlawed coffee in the 1970's in an attempt to eradicate the influence of what he termed the "fascist occupiers" things were bleak for a while on the coffee scene.  Only Arabic coffee was served in very dim unappealing cafes and women certainly did not make an appearance.   Now in 2011 things had changed completely.  Italian cafes were to be found throughout Tripoli and many were quite stylish.   More women than men frequented them and the culture had changed to allow women more freedom to go out and socialize. 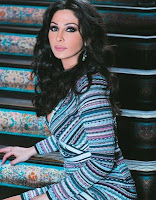 She caught his eye from across the room, her long dark hair shining .  She sat alone and he wondered was she waiting for a friend or for her husband?  He thought of poor Fatima his work colleague.  They had worked together for two years now and she refused to accept the fact that he did not want to marry her!  He liked Fatima with her gentle smiling face and sweet voice.   But there were no sparks and he couldn't imagine being attracted to her.  She was from a wealthy Libyan family and was more confident than the women he knew in Egypt.

Libyans were always surprising him.  They had their roots in Berber and African culture and while they were sophisticated due to the oil wealth in the country, they were never far from the desert and were extremely aggressive in their behavior.   You certainly wouldn't want to get into a fight with a Libyan!  In time he learned to appreciate their history and culture as well as the Bedouin traditions. 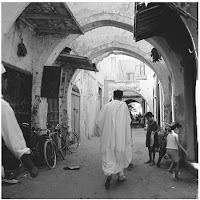 Posted by Peacelovehope at 10:50 AM